Can I Really Reverse my Alzheimer’s and Cognition Problems?

Robert Hedaya, MD, has been at the cutting edge of medical practice, psychiatry and psychopharmacology since 1979, and has been practicing Functional Medicine since 1996. He is also a Clinical Professor of Psychiatry at Georgetown University Medical Center. Author of three books (Understanding Biological Psychiatry, The Antidepressant Survival Guide, and Depression: Advancing the Treatment Paradigm), and the founder of the National Center for Whole Psychiatry in the Washington DC area. He has been on national media (20/20, 60 minutes, the New York Times, Washington Post etc.) on many occasions and is a frequent, nationally and internationally recognized speaker.
Listen Now 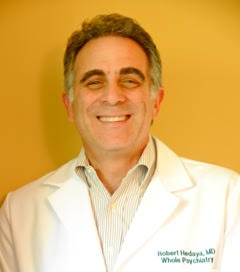 Dr Hedaya explains the difference in his approach to traditional psychological conditions, cognitive impairment, and Alzheimer’s. Bob recounts a recent encounter he had at an academic conference where he challenged the current paradigm. We talk about how this approach is generally received by the medical community —because (like Semmelweis) it is often unfamiliar,uncomfortable, and inconvenient for the medical establishment in its current iteration.

We discuss our feelings about the realistic applications and limitations of applying “Alzheimer’s reversal” programs. We cover who might be the best candidate to succeed on these programs.

Bob explains his understanding of the systems biology approach of Functional Medicine and how it applies to his work in cognitive impairment and mood disorders.

30-50% of people with depression with develop Cognitive impairment.

We discuss the personal commitments in terms of time and energy someone has to make to become succeed with this kind of program and Dr Hedaya outlines his the first case he handled where someone with cognitive impairment improved.

Overall he recommends a Mediterranean style diet as the best diet in general.